Should Motels Make a Comeback?

During a recent stay in Florida, I came upon an exhibit called “Historic Hotels and Motels” at the Winter Park Historical Museum. The museum was on a street my feet used to walk many times – as it was in my hometown.
As a native Floridian, born in Miami and growing up in Orlando Florida, my youthful days were spent amongst the palm trees, lakes and shores. And many times, I stayed in the famous hotels and motels that were showcased in this exhibit.
The Oxford Dictionary defines a motel as “a roadside hotel designed primarily for motorists, typically having the rooms arranged in a low building directly outside.” 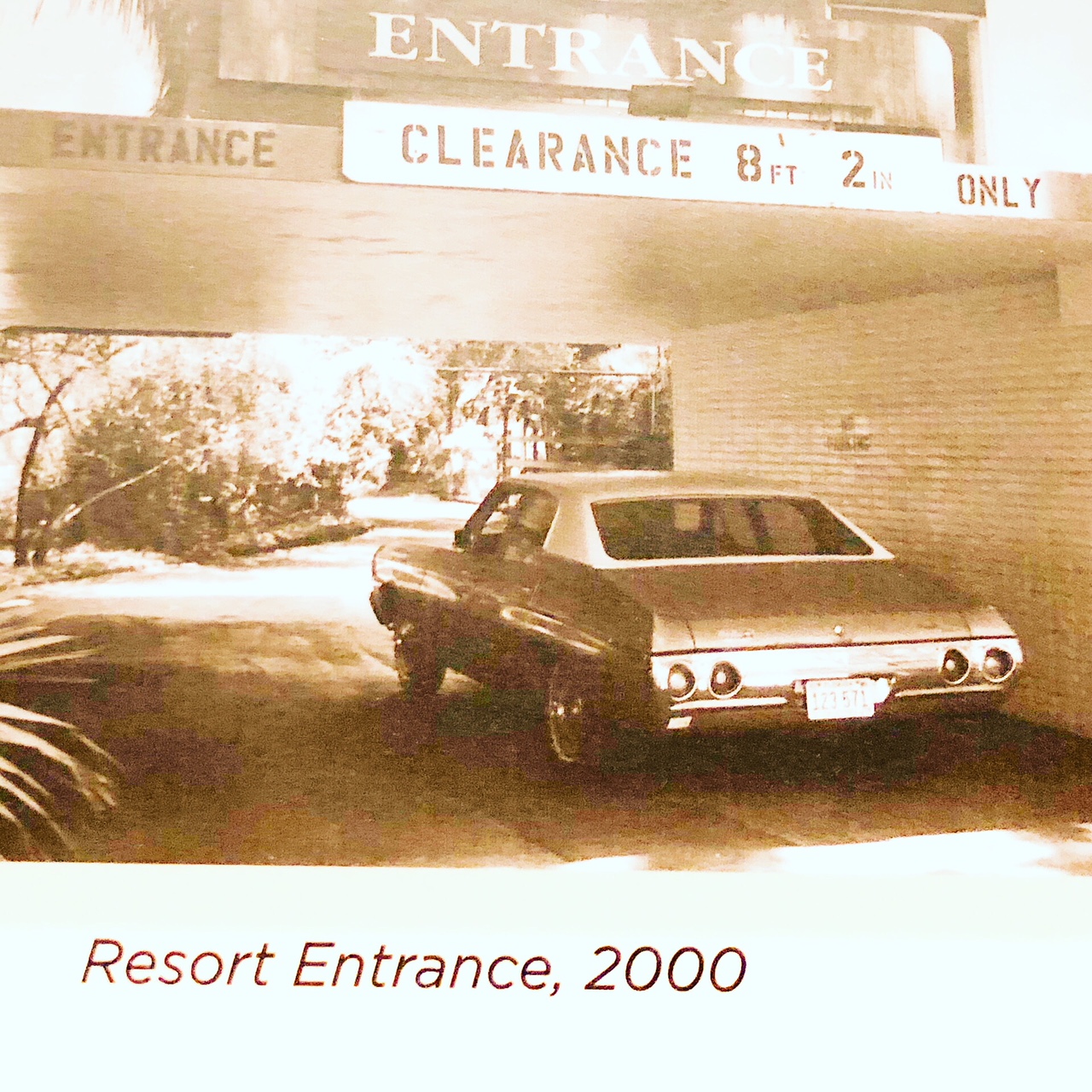 We don’t see too many motels in these modern days. We are greeted upon arrival at a hotel by the valet, and are deprived of the privilege of pulling directly up to our room. At a motel, unloading your bags was easy, and if you forgot something in the car, you didn’t need to walk very far to retrieve it.

As the exhibit stated, many individuals – not corporations – ran these motels and even hotels – and they were entrepreneurs. And each year, folks packed in the car and drove near and far to pull up to that motel door. They knew the owners, they knew many of the other families staying, they loved this little slice of paradise.

Air-conditioning was a new luxury to travelers in the South, as many of the beach resorts of old did not have this modern amenity. And in the end, they were demolished to make room for newer hotels and motels.

But…let’s not forget the unforgettable pool parties of past. They were amazing back then at many motels and hotels. And the Langford in Winter Park was one of the hippest places to stay – and even live. Many folks found it a way of life to reside at these hotels, or escape into oblivion. The exhibit revealed that many notable figures used it as an escape and hideout for days or weeks at a time.
But, as a photographer, my eyes went to a black and white photo of one of those infamous pool parties. I just pictured sitting there in my linen dress with short gloves and hair in an up-do, just watching the amazing, over-the-top entertainment.

The photo depicted a once in a lifetime pool party taking place. First, there was a pool filled with lovely women who were synchronized swimmers, with heads adorned with stylish rubber swim caps. Next to the swimmers, a couple was water skiing – how they pulled that off puzzled me. But, to my surprise there were also ice-skaters! A small ice rink was perched high above the pool. It was amazing; and I wondered just how you can have both warm pool water and cool ice surfaces.

Oh, I so wanted to have been at that hip pool party scene! 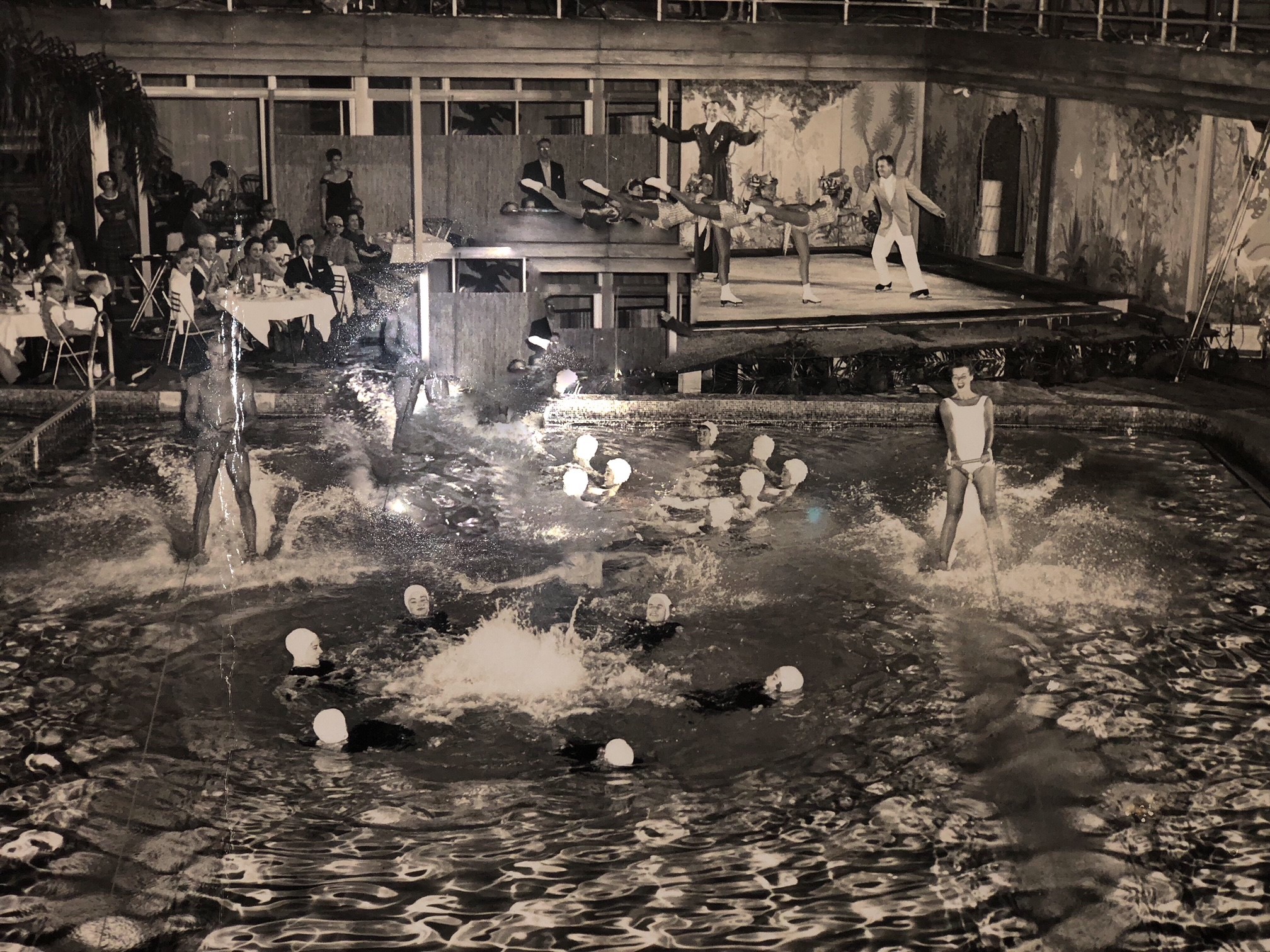 Then you have the wonderful motel pool family parties. Pools were filled with colorful umbrellas and plenty of poolside lounges and chairs. Parents got to mingle and take a rest while their kids played with the rest of the kids visiting for the summer. The wide-rimmed glasses, the martinis, the beach balls, the flipping of burgers near the tennis courts, all within walking distance from your motel room – how hip and fun!

I, for one, remember diving off many a motel spring board. Do we even have diving boards anymore? Waterslides are now a standard feature in many pools, but diving boards could be pretty scary – especially the high ones, which could prove painful when you belly flopped!

But those hip pool days are a thing of the past, replaced by more sophisticated pool landscapes.
On our own beautiful island, two of the original motels were the Sea Crest on Forest Beach and the William Hilton Inn. From what I have gathered after reading stories of the past and recollections on the internet, the Sea Crest was created for stranded individuals who just let the day of playing on the beach get away from them – and they needed a place to rest their weary heads.

But the William Hilton Inn was a hip modern motel of the 1960s. I discovered an old postcard on eBay featuring an image of the hotel with the caption, “Looking in from the Atlantic Ocean – features two pools, putting green, badminton, tennis, golf, dancing, oyster roasts – and free island tours.” Now that sounds like an exciting place to visit!

The Langford Hotel, the original Sea Crest and the William Hilton Inn have all been torn down and replaced by more modern inns and hotels. However, memories of all these motel parties and events remain in the hearts and minds of those lucky souls who were part of the in-crowd during those retro motel/hotel days.
A good oyster roast, round of golf, and dip in the pool never go out of style. Maybe the times were a bit hipper back then. The owners were entrepreneurs, not corporations. Most notably, the parties were amazing, and the time spent on the beach was fun-filled and memorable.
As the billboards in front of the motels many times read, “Wish you Were Here”, I so enjoyed reading all of them as we traveled down the road to our motel. And do miss (and wish) some of those old hotel and motels were still around town.

And I wondered, with Airbnb and retro trailers gaining popularity…maybe some of those old roadside motels might make a comeback.

I drive along many southern back roads. These now closed-down “motels” have beautiful settings, inviting me to imagine the days gone by. One such motel still has one room available and an older gentleman – maybe the old proprietor- sits in his metal chair and just watches the cars go by. There is something soothing about just watching the cars go by, many times in the middle of nowhere. Maybe it’s time to get that pool up and running again and add a great BBQ.

Who knew that just chilling with a few folks who came year after year to enjoy that pool, that BBQ and maybe even some cool entertainment could have been so appealing.
And then again, are we not going back to that again with the new lodgings such as Airbnb…owners who welcome you as their personal guests.

Maybe the roadside “motel” just might make a comeback….